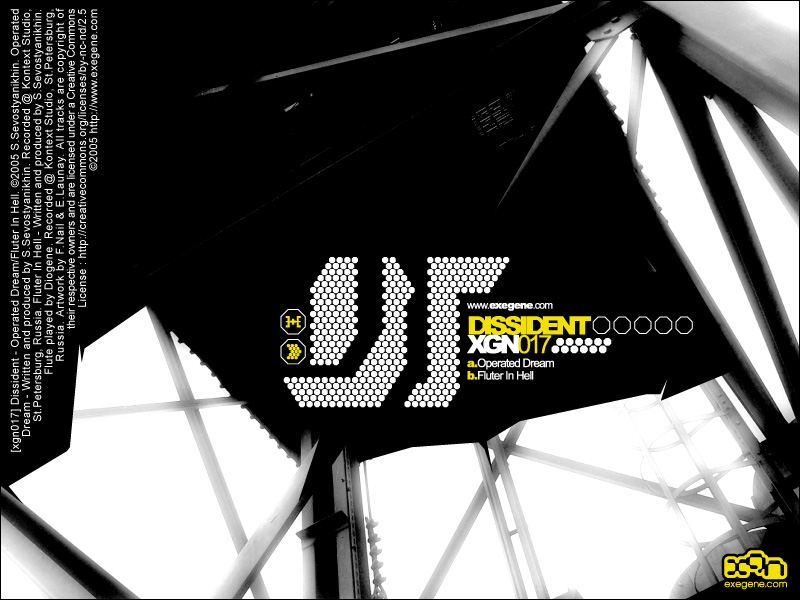 The 17th release comes from an upcoming artist with tracks lined up to be released on labels like Counter Intelligence and Subvert Central Recordings and Moving Shadow and Make:Shift. Dissident also has numerous tracks released on a variety of labels such as Renegade Hardware, Russian label Respect Records, and TAM Records, which he is the co-owner of along side DJ Bes. Dissident has also DJ'd alongside big names like Goldie, Bad Company, Fabio, Grooverider, Matrix, LTJ Bukem, Paradox, Nookie, Seba and many others.
He kicks off XGN017 with Operated Dream. A malaise of metallic beats for the heads pervades the sinister feel of this stepper filled with rolling snares and ragga vibes.
The rolling bassline carries the tracks underbelly while the reggae MCing maintains the flow.
There's loads of variety in the breaks used in this tune without going over the top to make this tune a top notch piece of work.
The B-side, Fluter In Hell starts off with groovesome bongos that introduce the tune by snaking their way round a stepping break. Snake charming flutes and subtle strings echo behind the rolling breaks.
This is then inflected with a quaking sub writhing beneath, while technoidal noise makes the groove more expansive swinging things out as more hi hats attack and keep things tense. Some eerie cinematic business.

All tracks are copyright of their respective owners

Reviewer: mikemarmo - favoritefavoritefavoritefavorite - September 3, 2007
Subject: Not bad at all
No annoying samples. Cool sound efx in the
background. The beats snd more realistic
than usual. Less techy. I like the snare
hit and bass line on track 1 and on track
2 the flute and synth riff. There's a voice says "fever" i think